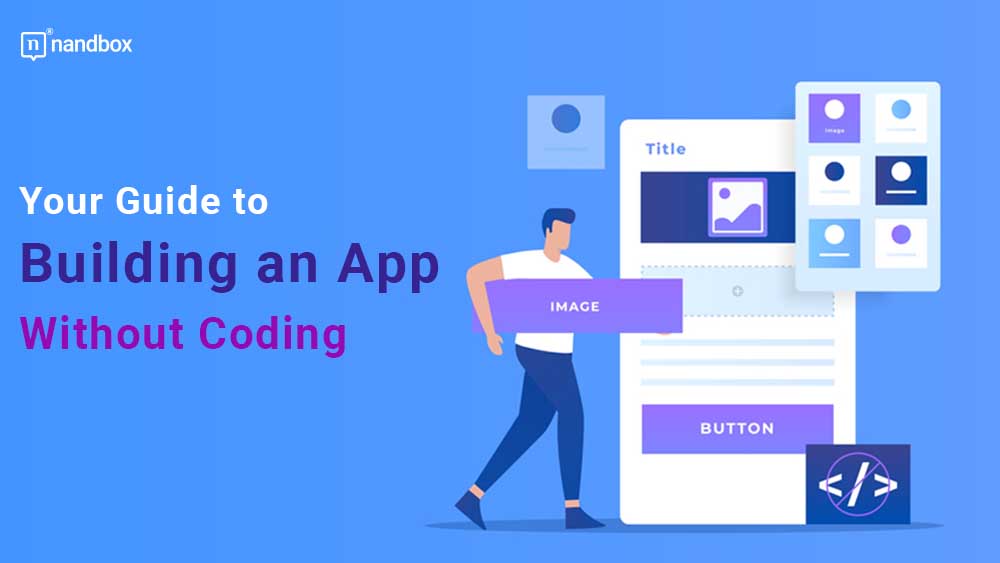 Your Definitive Guide to Building an App Without Coding

Mobile apps have been around for more than a decade now. Long enough for us to know that they are not a fad and to see that they offer businesses tangible benefits.

But for small business owners, the cost and complexity of building an app have—for years—made it a low priority. You must either:

Meaning that a branded mobile app was out of reach for many medium enterprises, let alone small, family-owned businesses.

This is no longer the case.

The emergence of no-code app builders like nandbox has made it possible for anyone to create an app affordably, with little-to-no technical skills needed.

Still unsure? Our definitive guide to building an app without coding will help get you started.

What Is a No-Code App?

Simply put, a no-code app is one that was built without using any code. It doesn’t mean that the app doesn’t use any code. It means that the person who created the app did not need to write or edit any code. You achieve this by using a no-code app builder with pre-made templates and features. Instead of limiting you, the pre-made templates help guide you by presenting you with a basic layout and features. You can customize any of the design elements, and you can add and remove features as needed. Adding a new feature is as simple as selecting the feature you want and using a drag-and-drop action.

The more sophisticated the no-code app builder is, the more features and customizations you will have access to. So, rather than ending up with a mobile app that looks and behaves like dozens of other apps, you have an app that is unique to your business. All this was achieved without any coding; and with only a little bit of technical skill.

What Is the Best No-Code App Builder

Debating which no-code app builder is the best is a little like debating which browser is better. It all comes down to which one offers you all the features you need, and you are most comfortable using. That said, there are a few things you need to consider.

You develop a native app with a specific operating system in mind. If you wanted your app to work on both iPhones and Android devices, you would need to create two versions of your app. While this adds extra steps to the app creation process, it does have major benefits. Native apps tend to be faster, and they have better integration with the operating system(s). You install native apps from the Apple App Store and Google Play.

Hybrid apps are essentially web-based apps that are wrapped in a native app shell. Although they are faster to develop, they can lack proper integration with the operating system. They can also be less powerful than native apps in terms of performance and features. You install hybrid apps from the Apple App Store and Google Play.

Web-based apps are hybrid apps without the native app shell. You do not install web-based apps from any app store, and they open in your browser. They don’t work well—if at all—if you are offline. And they lack some features available with native and hybrid apps.

nandbox is the only no-code app builder that allows you to create a true native app. All other app builder platforms allow you to either create a hybrid app or a web-based app. Which approach you choose depends on your audience and the features you want in your app.

Purpose of the App

Limiting you to creating a hybrid, native, or web-based app isn’t the only way no-code app builders differ from each other. Many focus on allowing you to create a customer-centric app. But others are for creating internal tools; apps that only your employees or suppliers use. So, the purpose of your app determines which app builders you look at.

Before you start looking at no-code app builders, you should already have an idea of what your app should allow. Will it include a chat feature? What about support for a loyalty program? The best app builders allow you to customize your app by adding necessary features. Additionally, they will offer a wide range of features you can choose from. Study the list of features to ensure the features you need are available.

No-code app builders do make it more affordable for anyone to build their own app. But how they price their services can vary considerably. Some charge per user, while others limit the features available according to the tier you sign up for. These are ongoing monthly costs. Just remember to not only look at the price displayed at the top of each plan. Look too at what restrictions, features, and type of support each plan includes.

Starting off with a free plan is a great way to assess different app builder platforms. This gives you a chance to see how easy it is to create your own app. And it also provides you with an opportunity to evaluate the features you can add to your app.

Depending on the no-code app builder you decide to use, you can usually divide the actual process into four simple steps.

Using templates makes it easier for you to start with a half-formed app. The type of templates available typically align to a specific type of app or app purpose. Broadly, the templates cater to:

Choosing a template will create an app with the most common features for that type of app already selected. So, the e-commerce template would already include a shop and loyalty features along with payment options. And a communication template would already include messaging, audio, and video call features. Some app builders might even allow you to start with a blank canvas, only including a top or bottom menu.

Choosing a template gives you an app frame that already includes common features for the specific app type. But the app builder shouldn’t force you to use these pre-selected features. A good no-code app builder should allow you to delete features you don’t want and add extra features.

In many instances, you can add features by simply dragging them into the design area. You should be able to rearrange the order, and many will need to be set up and customized. This includes changing the title, icon, and updating settings. What settings are available—and what you can alter—vary for each feature. By way of example, a booking feature may require you to specify the duration of each booking. Titles should be short but informative. Users should know what each feature is or does just by reading the title.

Other ways in which you can customize your app would be by:

You typically won’t be too limited in the number of features you can add. However, you should still focus on the features your app needs. Don’t add unnecessary features simply because they sound nice. Too many features will not only make your app more complex to use, but they can also affect performance. And just as users will abandon a website that loads too slowly, they will also abandon apps that are slow.

If there are colors that your customers already associate with your brand, you should use them when customizing your app. But the app builder should also allow you to personalize the app. This would start with the name of your app and the app icon. But you should also be able to:

These not only add polish to your app but can also assure users that the app is legitimate and part of your brand.

Build and Publish Your App

Once you are happy with the features of your app and your customizations, you are almost ready to publish it. Publishing an app means making it available to download and install it from the app store. But before you can do that, you need to build your app. This should be an automated process that creates the actual app, ready for testing and publishing.

Testing is an important step to take before publicly releasing your app. But you also need to have a Google or Apple Developer Account. Creating and setting up your developer account(s) is a one-time process. But testing your app should happen every time you make significant changes to your app.

Building an app isn’t a once-off process. It is essential that you periodically update your app. This might involve making changes to the settings of certain features, including the title. Or it might see you adding requested features and removing unused features. Monitoring how users interact with your app allows you to pick up on problematic areas of your app along with unpopular features. User reviews and feedback are also a great source for this information.

Using a no-code app builder won’t mean having to recreate your app every time you want to make changes. But you will need to build and publish a new version.

Do I Need a Graphic Designer for a No-Code App?

Having a graphic designer work with you as you create your first app isn’t a requirement. But it can be beneficial. The app builder—and the template you choose—take care of the menus and in-app icons. But the app icon displayed in the app store and on user devices would benefit from a graphic designer’s touch.

There is an art to designing an app icon. Although you design the app icon at 1024 x 1024 pixels, it is displayed much smaller. Without a designer’s input, the icon can be unclear and lose detail when scaled down. Your graphic designer can also assist with designing a unique splash screen that perfectly represents your brand. Fiverr and Upwork are both great services to use to find a freelance graphic designer if you don’t already have one.

If you need to include photographs in your app, particularly for products, you should also have these professionally taken. If possible, include multiple views of each product, preferably with a neutral background.

A good app is one that is both user-friendly and helps users. And both elements depend on the app builder you use and the amount of thought and research you put into them. Instead of just asking whether no-code apps are good, you should also understand the pros and cons of no-code apps.

A big advantage of no-code apps and app builders is that they make apps accessible to small business owners. But it certainly isn’t the only advantage.

No-code apps and app builders are not without any disadvantages. But for many business owners, the pros will outweigh the cons.

A final thought on no-code apps. Even though they are much easier to develop than a bespoke app, there are some crucial steps you should follow. And you need to complete many of these before you settle on a no-code app builder platform. But once taken care of, there will be little standing in the way of you finally having your own app.

Top Customer Loyalty Program Apps & How to Create Yours on nandbox!

Why Android Outclasses iPhone in These 6 Features